It’s Thursday and you’re dreaming of escaping to an exciting place and forgetting the hectic everyday reality. Let me immerse you in another world even if just for a moment.

Welcome to Westeros! Yes, the Game of Thrones’ Westeros! This month we are pulling out of the archives some of the creative that we did for HBO Canada. 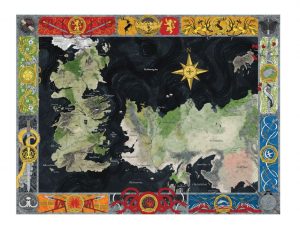 When we travel to new place we always look for tools that help us get our bearings. Navigating an imaginary world, is even tougher since there is no real compass to orient us. Tools that can simplify this endeavor and create a visually appealing and immersive experience would be quite powerful. 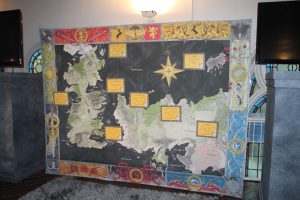 Prepare an impactful visual to be used at the Media Event for the launch of Season 3. The media event was organized by LEX PR focusing on the key plot point in Game of Thrones Season 3 – The Red Wedding.

Develop a real map of the world of Westeros, complete with all castles and locations. We actually drew the whole map from scratch! 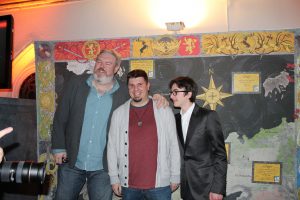 The creative was so powerful that the attendees kept on going up to the map and snapping photos with it. Bran Stark (Isaac Hempstead Wright) and Hodor (Kristian Nairn), who were present at the event, even signed the map. This piece of creative was such a hit that we were tasked with expanding it into an immersive fan experience on Toronto’s Union station for the launch of Season 4 (2014). The idea for this station domination was a collaboration with HBO Canada (OMD executed the media buy). The station was transformed with pillars turned into stone columns and Game of Thrones symbols adorning the floors and walls. Both campaigns were successful at hyping up the launches of this much anticipated series and encouraging fans to enter a different dimension of fandom!

Take a look at how fans reacted to the Toronto Union Station takeover.

“Winter is coming” can only sound this sweet when it relates to Game of Thrones!