This warm weather has us plotting all kinds of fun adventures with every waking moment. How about daydreaming over a cup of tea?

Here’s a throwback to Excite Your Senses with a Tetley and Cirque du Soleil Partnership.

Tetley tasked Commix with development of a masterbrand promotion for Tetley® Tea that delivered in-store support, retail involvement and consumer engagement. The objective was to drive share and sales growth for Tetley® Hot Tea with focus on specialty SKUs. The emphasis was against:

When looking for insight into this category, we saw the need to align Tetley with a unique, premium Canadian propert 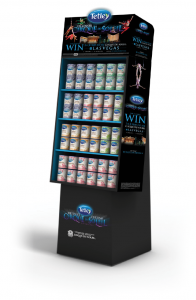 y with similar values. Cirque du Soleil proved to be the ideal partner as it is a living example of Tetley’s “mind.body.spirit.” positioning. The performance giant’s global appeal and primary target alignment (women 25-49) elevated Tetley’s brand’s image, while Cirque du Soleil’s Canadian origin solidified buy-in with both consumers and retailers. The unique sight of Cirque du Soleil in grocery chains also added inimitability to the program and an element of surprise and delight for consumers and retailers alike.

To drive engagement and excitement among both retailers and shoppers, while staying top of mind, multiple points of contact had to be interconnected. In-store we developed on-pack stickers, shelf talkers, on-floor displays (POS and DRP’s) as well as flyer ads and feature pricing. We also created an e-blast campaign directed to the Tetley consumer database. Facebook posts, digital and TV media buys were executed by John Street to further extend consumer awareness of the promotion. All materials drove to an online hub – a Commix-created contest site. Retailers were engaged via account-specific programs and sales incentives to ensure their store’s needs were addressed.

We developed creative incorporating Cirque du Soleil performers that extended to on-shelf, secondary displays and on-pack campaign pieces. The association of performers in beautiful costumes and exciting poses with the specialty tea SKUs was a great way to tell a story about the experience of drinking Tetley teas and the great taste of the product. We connected the in-store elements to an exciting contest grand prize – a chance for 2 people to see a Cirque du Soleil show of their choosing anywhere in the world Cirque performed. In addition to grand prizes, there were also weekly prizes.

The main focus of this campaign was wom

en 25 – 49 years old who were highly aware and socially conscious, independent opinion leaders not easily swayed by status. The second subset within this age group were more likely to be followers, who focus on personal success, social status and making choices to better the planet. 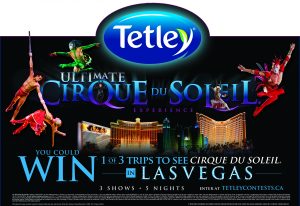 The campaign generated 100K+ unique visits within the first 7 months. There were 1.1MM total contest microsite visits, with returning visitors being in the majority. The email database that was built as a result of the contest was much larger than originally anticipated. The majority of traffic to the site was organic with Tetley.ca being the second largest source of traffic, followed by online community pages, e-blasts and Facebook. Consumers were highly engaged with the contest, with an average of 2,900+ daily prize entries, as well as a 40%+ open rate of the e-blasts, results which are much higher than the industry average (13%).

Tetley and their retail partners were so happy with the results of this campaign that they asked Commix to run a follow up Cirque du Soleil program the following year.